Continental had a large multi­year IT­sourcing deal with IBM and now it has opted for a start­up, Ideafarms , among its four sourcing partners (EDS, HP, Wipro and Ideafarms).

Can you explain your strategy?

The 10­year IBM deal was signed in 1995 and it ran into three problems ­ quality, cost overruns and lack of innovation.

With IBM, Continental completely lost control over its IT operations. That's because we were working in a non­standardised environment. This forced an early termination of some of the contracts with IBM.

Now we do work with Ideafarms, Wipro, EDS and HP and find this arrangement more convenient. We have the best vendor for what we want to source. Also, now we will never outsource work to a single company for a long period. Contracts will be for periods less than five years, probably less than three years.

But you are also giving away work to a small company, Ideafarms?

We didn't come up with Ideafarms overnight. Ideafarms has been our partner for the past four years. The India Competence Centre with Ideafarms is part of Continental's strategy of sourcing process­oriented niche applications from specialised players. We have similar centres in Philippines and Malaysia. Unlike Ideafarms, the other two are owned by Continental.

What will be the role of the new centre that you have announced in partnership with Ideafarms?

Why do you call it partnership and not outsourcing?

The global IT competence centre with Ideafarms is being positioned as a single point for providing knowledge­based IT consulting services to Continental AG worldwide and would also be responsible for evaluating and validating technology solutions.

At a later stage, the scope would be expanded to high value services in R&D and engineering services.

I am not against outsourcing. I believe that the tools and the processes need to be harmonised and fixed and service provider should be exchangeable. We should have standardised processes. That way it does not matter who (partner or vendor) is taking care of your systems. Right now, 30% of our work is in­house and the rest is with the four partners.

What is your IT spend? With new IT partners will it come down? 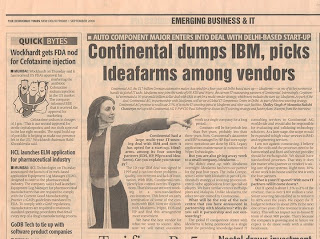 Smart sourcing has enabled us to reduce it by 40% over the years. We expect the IT budget to reduce by about 20% in the next one or two years (if the revenue is taken as static). This will not impact our in­house IT team of about 900 people. That's because the company is growing and in future we expect to do more work with a similar headcount.
投稿者 三上紘司・Hiroshi Mikami 時刻: 11:23